INTRODUCED BY:  Senate Committees on Health and Commerce and Consumer Protection

END_OF_DOCUMENT_TOKEN_TO_BE_REPLACED

SYNOPSIS:  Adds a new section to chapter 245, HRS, to establish the offense of unlawful shipment of tobacco products.

Amends section 245-1, HRS, to define “electronic smoking device” as any electronic product, or part thereof, whether for one-time use or reusable that can be used to deliver nicotine or another substance to a person inhaling from the device, including but not limited to electronic cigarettes, electronic cigars, electronic cigarillos, electronic pipes, vaping pens, hookah pens, and other similar devices that rely on vaporization or aerosolization, and any cartridge or component part of the device or product, but does not include cigarettes.  “Electronic smoking device” shall also include any liquid or gel capable of use in such electronic device that can be used by a person in the delivery of nicotine or any other substance, intended for human consumption, through inhalation of vapor or aerosol from the product.  “Electronic smoking device” does not include: drugs, devices, or combination products approved for cessation by the United States Food and Drug Administration, as those terms are defined in the Federal Food, Drug, and Cosmetic Act; or cannabis for medical use or manufactured cannabis products under chapter 329D, including devices used to aerosolize, inhale, or ingest manufactured cannabis products manufactured or distributed in accordance with section 329D-10(a).

Also amends the definition of “tobacco products” to be  (1)  Any product containing, made of, or derived from tobacco or nicotine in any form, other than cigarettes or little cigars, that is prepared or intended for consumption or for personal use by humans, [including large cigars and any substitutes thereof other than cigarettes that bear the semblance thereof, snuff, chewing or smokeless tobacco, and smoking or pipe tobacco.] or is likely to be consumed whether smoked, heated, chewed, absorbed, dissolved, inhaled, or ingested by other means, including but not limited to large cigars and any substitutes thereof other than cigarettes that bear the semblance thereof, pipe tobacco, chewing or smokeless tobacco, snuff, or snus; (2)  Electronic smoking device; or (3)  Any component, part, or accessory of any product, electronic smoking device, or substance that is listed paragraph (1) or (2), whether or not any of these contain tobacco or nicotine, including filters, rolling papers, blunt or hemp wraps and pipes.  “Tobacco products” does not include: drugs, devices, or combination products approved for cessation by the United States Food and Drug Administration, as those terms are defined in the Federal Food, Drug, and Cosmetic Act; or cannabis for medical use or manufactured cannabis products under chapter 329D, including devices used to aerosolize, inhale, or ingest manufactured cannabis products manufactured or distributed in accordance with section 329D-10(a).

Amends section 245-2.5, HRS, to raise the annual fee for a retail tobacco permit from $20.00 to $50.00.  Requires that the permit application specify whether each place of business sells electronic smoking devices, and directs that the permit issued also so specify.

STAFF COMMENTS:  The question that should be asked is what the purpose of the tobacco tax is. If the goal is to make people stop smoking by making it cost-prohibitive to smoke, then (a) it’s working, as hikes in the cigarette tax have begun to exert downward pressure on collections not only locally but also nationally, but (b) it shouldn’t be expected to raise revenue, because of (a). If the goal is really to stop the behavior, why are we not banning it?

As the Foundation’s previous President, Lowell Kalapa, wrote in the Tax Foundation of Hawaii’s weekly commentary on October 28, 2012:

Lawmakers seem to have a simplistic reaction to solving problems the solution to which plagues their constituents – tax it.

Probably the best example is what people like to call sin taxes, those excise taxes that are levied on tobacco and alcohol products.  After all, smoking causes cancer and alcohol causes all sorts of problems including driving under the influence.  Lawmakers and community advocates shake their heads and push for higher tax rates, arguing that making these products more expensive will deter folks from using these products.

The problem is that lawmakers also like the revenues that are generated from the sales of these products and, in some cases, they have tried to link the use and sale of these products with noble causes such as the funding of the Cancer Research Center that is currently being built.  Again, the argument is that smokers should pay for programs and projects which seek to cure the related ill which in this case is cancer caused by smoking.

The irony is that arguments to increase the tax on tobacco and, more specifically, cigarettes, is a goal of getting smokers to quit while depending on the revenues from tobacco and cigarette taxes to fund an ongoing program, in this case the Cancer Research Center.  So, which is it folks, stop smokers from smoking and if successful, there won’t be any revenues to fund the Cancer Research Center?

The fact of the matter is that it appears that both locally and nationally, higher taxes on cigarettes are influencing smokers as tax collections on the sale of cigarettes have fallen.  Certainly some of the decline is due to smokers actually quitting, but to some degree one has to suspect that some purchases were made via mail order from exempt Indian reservation outlets while others may be what is called gray market purchases, that is from sources outside the country.

What should come as a surprise is that most of the folks who have quit are of some means as they are more likely to recognize the health hazard caused by use of this product. That means most of those who are still smoking are among the lower-income members of our community.  Thus, the tax is regressive, generating less and less collections from middle and higher-income individuals. 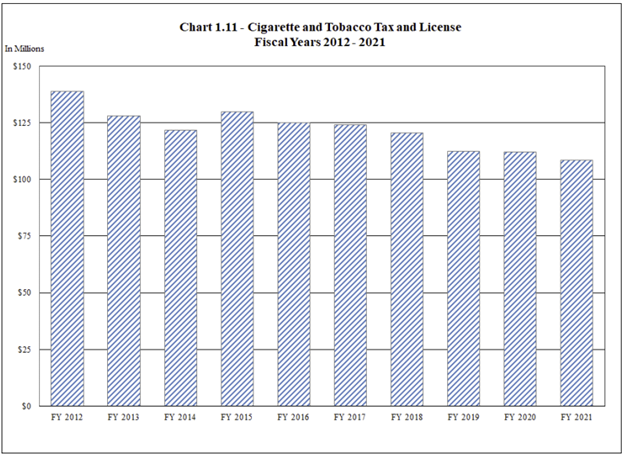 As predicted, programs that have been fed by earmarks from the tobacco tax, like the Cancer Research Center, have become a victim of the success of tobacco cessation programs and publicity.  Revenues produced by the tobacco tax have been in steady decline over the past few years despite tax rate increases; hoisting the smoking age to 21 in the 2015 session certainly didn’t reverse the trend.

Fiscal reliance on funds from a sin tax is inadvisable, perhaps outright dangerous.  If the goal is to affect social behavior, use of the tax law is not the most effective way to do so.

EXECUTIVE SUMMARY:   Retroactively restores the foreign-trade zones exemption from taxation under the general excise tax law, use tax law, fuel tax law, liquor tax law, and cigarette tax and tobacco tax law.  This issue seems to have stemmed from the Department’s misunderstanding of what laws can or can’t apply in a foreign trade zone.  The Department seems to have now figured it out and it wants taxpayers to pay for its mistakes…retroactively.  We think it’s appropriate for the Legislature to step in and come up with a just resolution.

END_OF_DOCUMENT_TOKEN_TO_BE_REPLACED

INTRODUCED BY: SB by MORIWAKI, Keith-Agaran, Shimabukuro; HB by YAMASHITA

END_OF_DOCUMENT_TOKEN_TO_BE_REPLACED

INTRODUCED BY:  Senate Committees on Health and Commerce and Consumer Protection

END_OF_DOCUMENT_TOKEN_TO_BE_REPLACED

INTRODUCED BY:  Senate Committees on Health and Higher Education