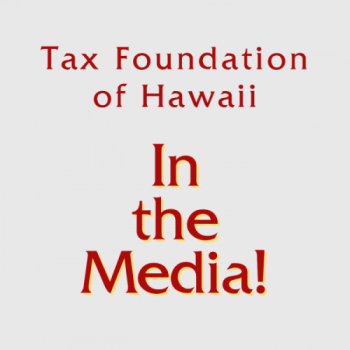 “In a coordinated effort, lawmakers in seven states that collectively house about 60 percent of the nation’s wealth — California, Connecticut, Hawaii, Illinois, Maryland, New York, and Washington — are introducing wealth tax legislation this week,” warned a press release I received Tuesday from the national Tax Foundation.

You can read more about that here.

Wealth taxes are so economically destructive, the foundation said, that of the 13 OECD countries that have instituted them since 1965, all but three have abandoned them.

I checked in with Tom Yamachika, president of Tax Foundation of Hawaii. If such a bill is introduced this year, the foundation will track and testify about it — just as it did last year when state Legislators introduced a wealth tax measure.

Yamachika’s post at the TFH blog last year is a great primer on the issue. “What’s the difference between a wealth tax and the income tax that most of us are more familiar with?” he wrote. “Income tax is imposed when you make money but it doesn’t apply when you simply hold on to it. Wealth tax, like real property tax, is imposed every year on the wealth that you do have. … This, by the way, might not be a problem only for the ultra-wealthy. If the tax isn’t producing what lawmakers want, there is always the prospect that future legislatures will drop the threshold so that it bites more people.”

One of the problems with a wealth tax is that they drive out investors, leaving the communities that pass such taxes poorer.

Are we resilient in case of unexpected expenditures. Has Hawaii been responsible in terms of...

…But Tom Yamachika, president of Tax Foundation Hawaii said if you think you owe money,...

Tax Increases Will Be Proposed in the 2021 Legislature. The host for this episode is...

In this article, Sen. Rhoads expresses his opinion on President Yamachika’s recent commentary regarding candidates...

No one’s wallet is safe! The host for this episode is Jay Fidell. The guest...