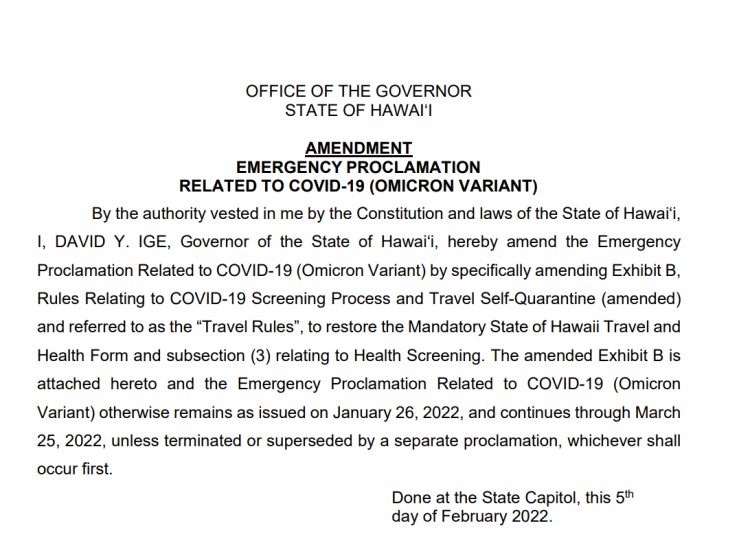 What readers might not have known is that an organization named For Our Rights sued the Governor, the Attorney General, and the State, seeking to have a court declare that this practice of chaining proclamations was illegal.  The courts, however, found otherwise.  In a case named For Our Rights vs. Ige, the Intermediate Court of Appeals held that there was nothing wrong with what the Administration did.  The statute, the court said, doesn’t say the Governor can’t issue more than one emergency proclamation based on the same emergency.  The court says that as long as the Governor finds that circumstances giving rise to a declaration of a state of emergency have occurred, or that there is imminent danger or threat of an emergency, then the Governor can issue a second, or third, or fourth, proclamation.  That is, the Governor can’t extend the period of an emergency proclamation but the Governor can issue a new proclamation two months later if the danger to our State is still there.  For Our Rights asked the Supreme Court of Hawaii to take a look at the case, but on June 20, 2022, the Supreme Court declined to do so.

The emergency powers granted by our laws are broad and sweeping.  It’s scary to have them all in the hands of one person.  We’ve earlier complained that those powers were used to torpedo laws that had little or no connection to emergency relief, such as suspending the distribution of transient accommodations tax money to the counties, the public procurement code, and government transparency laws.  Where are the checks and balances when you need them?

We ought to be fixing this situation before we have another emergency.  Who knows what laws might be on the chopping block next?

The ongoing furor in Honolulu over the extent to which the rail project is adequately...

Some folks ask me if I have any radical ideas to change the tax system...