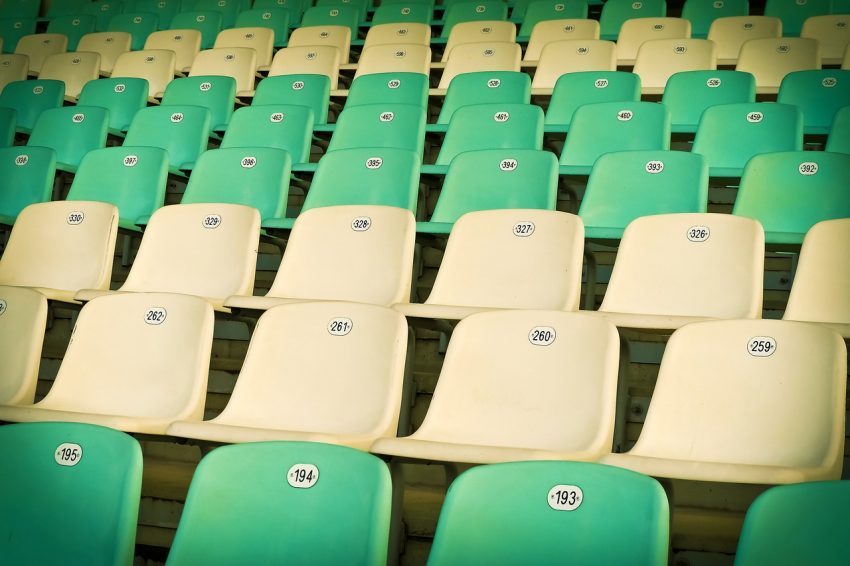 While everyone’s attention is focused on COVID-19 and racially charged police brutality, we should also pay some attention to major happenings here at home.

One of them is the venerable Aloha Stadium, former home to the Aloha Bowl and now affectionately called the Rust Bucket.  The stadium was built using a then-new product called “Weathering Steel,” which was supposed to develop a thin coat of rust on the outside of the steel that would prevent the steel from rusting any further.  The makers of this product didn’t factor in Hawaii’s salt-laden moisture, however, and the stadium developed way more than a thin coat of rust.  Then there were bleachers that were supposed to move and convert its football shape into a baseball configuration but wound up being non-movable.  Hawaii residents did get some use out of the stadium but its condition has deteriorated further and now needs significant maintenance.

To deal with this problem, our government came up with the idea of NASED, an acronym for New Aloha Stadium Entertainment District.  It even has its own nifty website.  The idea was that a design firm would be hired to come up with some plans, and then a Public-Private-Partnership would be formed by late 2020 between the State and a selected private developer to do the build-out.

The design firm, in late 2019, produced three draft concept plans that would be put out for discussion and debated: 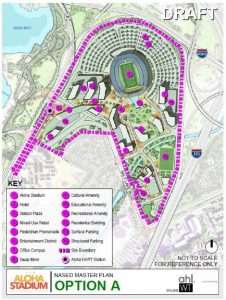 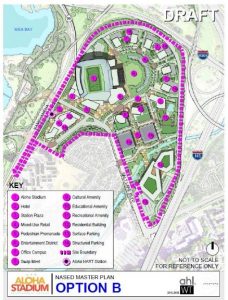 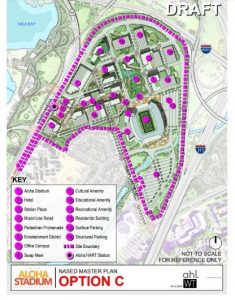 Plans for restaurants, retail, entertainment, hotels, and residences are presented in the three renderings.

The plan is for the State to put up $350 million, with $20 million coming from the general fund and the rest being borrowed through a bond issue.  That sounds like a good deal, with 25 years of maintenance costs projected to be $423 million.  But there are still some tough questions to be answered.

The land on which the stadium sits is 98 acres owned by the State.  Access to the area is very easy, with Kamehameha Highway, the H-1 Freeway, the Moanalua Freeway (H-201), and a new Stadium rail station serving the area.   Do we really want the entire site developed as an entertainment district?  We have a major recession that is expected to continue for a while and continued high unemployment.  What about housing, especially affordable housing, that was previously identified as a high priority for our State?

Can we afford to take the risk of building a new stadium with an entertainment center that may become a financial white elephant like our convention center?  The financial plan assumes that the State’s share is going to be $350 million, but the actual number might be nowhere near that if, for example, the selected developer uses COVID-19 as an excuse to jack up the price tag.  In any case, shouldn’t the financial drain that this project will cause be justification enough to push the pause button, as Honolulu Mayor Caldwell did on the proposed $772 million Blaisdell Center renovation project?  Will this project become Convention Center 2.0 or Rail 2.0?  Let’s make sure we are getting something we really need at a price we can afford to pay.

Today, we focus on Kauai real property tax, thanks to an alert reader who has...

By Lowell L. Kalapa      One of the phrases that the public is beginning to...

By Lowell L. Kalapa (Released on 3/29/09) Legislators are wringing their hands over a couple...

By Lowell L. Kalapa When lawmakers convened in early January for the 2003 session of...

By Lowell L. Kalapa This year’s primary election is but a few weeks away and...