The Tax Foundation of Hawaii, a nonprofit taxpayer watchdog organization, filed suit against the State of Hawaii in October 2015 to halt the State’s practice of skimming tens of millions of dollars each year from the amounts collected for the Oahu rail surcharge. The lawsuit alleged that although the law authorizing the diversion allows the State to retain the costs of administering the surcharge, the amount taken was many times those costs, amounting to a hidden State tax unwittingly paid by Oahu residents and businesses.

According to Tom Yamachika, President of the Tax Foundation of Hawaii:

“We filed this lawsuit because we on Oahu pay an extra 0.5% surcharge on most of the things we buy, and thought that the money was going to rail. In fact, over $220 million to date was skimmed off to the State general fund and was spent on everything but rail.

“Despite the rejection of the Supreme Court of Hawaii, our efforts were key in the legislature’s decision to drop the skim from 10% to 1% during the 2017 Special Session—this was a win for all taxpayers in this State. Had we not filed suit, perhaps the skim would not have been reduced at all and would continue until today not only in Honolulu, but in all other counties that have adopted the surcharge.”

Copies of all documents pertaining to this lawsuit are available on the Tax Foundation of Hawaii website.

For more information, please contact the Tax Foundation of Hawaii at (808)536-4587 or email tfh@tfhawaii.org.

About the Tax Foundation of Hawaii:

The Tax Foundation of Hawaii, a private nonprofit, nonpartisan, educational organization has, for the past 60 years, encouraged efficiency and economy in government and has promoted an equitable tax system that encourages and maintains economic growth and stability in Hawaii. Read more about us at http://www.tfhawaii.org.

The Hawaii Supreme Court is considering a lawsuit challenging the rail tax. Both sides made... 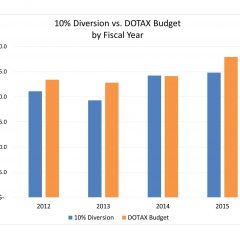