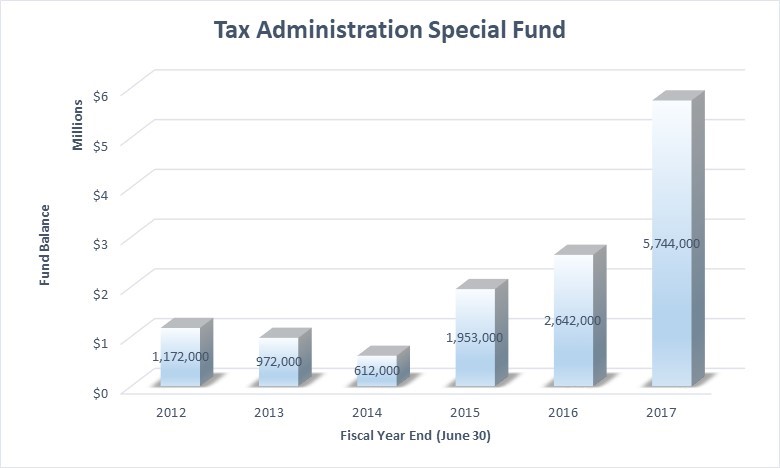 In early November 2017, the State Auditor issued Report 17-10, which reviewed special, revolving, and trust funds administered by the Department of Taxation.  One of them is the Tax Administration Special Fund, which, although not an area of concern for the auditor, is becoming an all-purpose slush fund for which corrective action is needed.

The Tax Administration Special Fund was established by Act 215 of 2004, one of the major purposes of which was to rein in the High Technology Business Investment Credit, a whopping incentive for the high technology industry and others that was rapidly spiraling out of control.  The thought at the time was that because the Department of Taxation was spending a lot of time issuing rulings on the applicability of the credits, the Department would be allowed to charge user fees for the rulings and thereby pay for a few more bodies to review the cases and pump out the rulings.  The special fund was enacted for that purpose.  Its authorizing statute was placed in the Income Tax Law because the high technology credit was an income tax credit.

In 2015, Act 204 enacted new compliance requirements aimed at transient vacation rentals, such as bed and breakfast operators who “conveniently forget” to pay both GET and transient accommodations tax (TAT).  The bill imposed fines upon those who failed to comply, and allowed those fines to go into the special fund.

At this point, the fund was fed by activity relating to the income tax, the GET, and the TAT, but the statute authorizing the fund remained in the Income Tax Law.

On the expense side, the Department apparently found itself with too much money in the special fund, so it asked the legislature for authority to spend the fund money on taxpayer education programs and publications.  That bill breezed through the legislature and became Act 89 of 2014.

Even with this extra spending authority, the fund has ballooned in recent years:

The lion’s share of the State’s tax revenue goes to the general fund.  The expenses of collecting that revenue should therefore be paid by the general fund.  (Special funds are also charged for central administrative expenses, as we described in a previous article.)  Giving any agency a special fund allows it to spend money while bypassing legislative oversight.  Moreover, when fines and penalties are channeled directly into a special fund out of which tax collectors are paid, it incentivizes the Department to penalize people to maximize its revenue, when they should be administering the revenue laws equitably and fairly.

For similar reasons, the Foundation raised concerns about a bill sponsored by the Department of Public Safety in 2016 that proposed to scoop any fines raised from violations of the State drug laws.  That department wanted to drop those fines into their special fund so they could hire more enforcement personnel.  We said that wasn’t a good way to fund government operations.  Thankfully, the Conference Committee snipped out that provision from the final version of the bill.

The facts and figures in the Auditor’s report highlight these concerns.  The Tax Administration Special Fund, originally intended to hold a few hundred thousand dollars, has grown to $5.7 million in just a few years.  Why?  Has the bloodlust to collect fines and penalties taken over at the Department?  The Department is given statutory powers that can and do ruin businesses and lives, and, under HRS section 662-15(2), the Department is absolutely immune from liability for erroneous, intentional, or even fraudulent misuse of those powers.  So, there are very good reasons why we need the Department to act responsibly.  We need to give the Department adequate resources to do its job, but a slush fund should be out of the question.