KHON2 News has learned that a new law places a cap on a fund that helps affordable housing.

In Hawaii’s hot real estate market, numerous homes are bought and sold every day. But did you know there’s a tax paid by the seller of a property that helps affordable housing?

“We’re seeing an increase in real estate transactions so we assume the amount of conveyance tax procedures is going to go up,” said Gavin Thornton with the Hawaii Appleseed Center of Law and Economic Justice.

An increase in transactions should mean more money for affordable housing. Except for the fact that beginning this fiscal year, lawmakers placed a cap on that fund.

Thirty-eight million dollars, or 50 percent of the conveyance tax, whichever is less, will go toward the Rental Housing Revolving Fund.

“If you have a pool of money that is just used for particular purpose and the agency doesn’t have to justify it to you or me or the legislative body, then there’s no oversight,” said Tom Yamachika with the Tax Foundation of Hawaii.

So $38 million would go toward affordable housing and, with the new law, anything over would be placed in the general fund.

For example, for the fiscal year that just ended, more than $39 million in conveyance tax revenue was collected. If the cap was in place, a million of that, would have gone somewhere other than affordable housing.

While some groups would like to see the state invest more in this issue, at least one state lawmaker believes throwing more money at it is not the solution.

Slom says the conveyance tax is a bad tax.

“What do you say to people who are looking to you asking you, well what are you going to do to help the issue this upcoming session?” KHON2 asked.

“First thing is, we have to stop treating the homeless as one big group. From my standpoint. I want to help the veterans first. I want to look into the laws that put all of the mentally ill on our sidewalks,” Slom said.

KHON2 talked to several advocates for low-income families and affordable housing. They told me they don’t plan to ask lawmakers to lift the cap on that fund this upcoming legislative session.

But they will try to find other ways to get money. For example, they can ask lawmakers to appropriate more money for the issue, outside of the conveyance tax.

Here is a link to the story on KHON2’s site.

Tom Yamachika of the Tax Foundation of Hawaii will help us understand the origin and...

Why do we have to pay people not to work when other departments urgently need... 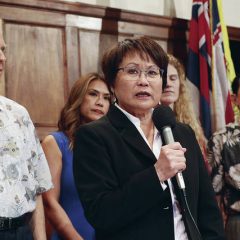 The full story can be found here.

Remember, we are facing a huge deficit. The host for this episode is Jay Fidell....