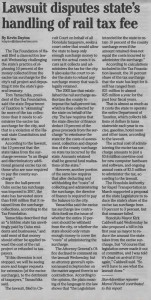 The Tax Foundation of Hawaii filed a class-action lawsuit Wednesday challenging the state’s practice of siphoning 10 percent of the money collected from the excise tax surcharge for the city’s rail project and depositing it into the state’s general treasury.

Tom Yamachika, president of the Tax Foundation, said the state Department of Taxation is “skimming” far more of the tax collections than it needs to administer the excise tax surcharge for the city, and that is a violation of the Hawaii state Constitution and state law.

According to the lawsuit, the 10 percent that the state takes from the surcharge revenue “is an illegal and discriminatory additional general excise tax on those who are now required to pay the county surcharge.”

Since the half-percent Oahu excise tax surcharge was imposed in 2007, the state has harvested more than $160 million that it retained from the surcharge collections, according to the Tax Foundation.

Yamachika described that as “a hidden state tax unwittingly paid by Oahu residents and businesses,” and said most of that money should either be applied toward the cost of the rail project or refunded to taxpayers.

“If this diversion is not stopped, we will be seeing more and longer requests for extension (of the excise surcharge), to the detriment of taxpayers,” Yamachika said.

The lawsuit, filed in Circuit Court on behalf of all Honolulu taxpayers, seeks a court order that would allow the state to keep only enough surcharge money to cover the actual costs it incurs as it collects and administers the tax for the city. It also asks the court to order the state to refund any surcharge money that was illegally retained .

The 2005 law that established the rail surcharge authorizes the county to impose the half-percent tax, which is then collected by the state on behalf of the city. The law requires that the state director of finance deduct 10 percent of the gross proceeds from the surcharge “to reimburse the state for the costs of assessment, collection and disposition of the county surcharge on state tax incurred by the state. Amounts retained shall be general fund realizations of the state.”

However, another portion of the same law requires that after deducting and withholding the “costs” of collecting and administering the surcharge, the director of finance is required to pay the balance to the city.

Yamachika said the excise tax surcharge law contradicts itself on the issue of whether the entire 10 percent should be withheld from the city, or whether the state should only retain enough money to cover the “costs” of administering the surcharge.

The Attorney General’s Office declined to comment on the lawsuit Wednesday, but an attorney general’s opinion issued in September on the matter argued there is no contradiction. According to the opinion, the plain meaning of the language in the law shows that “the Legislature intended for the state to retain 10 percent of the county surcharge even if the amount retained does not equal the costs incurred to administer the surcharge.”

According to calculations included in the Tax Foundation lawsuit, the 10 percent share of the tax surcharge that the state has kept for itself has ranged from $21 million to almost $25 million a year for the past four fiscal years.

That is almost as much as it costs the state to operate the entire Department of Taxation, which collects billions of dollars in taxes statewide each year in excise, gasoline, hotel room and other taxes, according to the lawsuit.

The actual cost of administering the excise tax surcharge amounts to just a $3.6 million one-time cost for new computer hardware and software, and ongoing annual costs of $2.5 million to administer the tax, according to the lawsuit.

The Honolulu Authority for Rapid Transportation in March supported a proposal at the state Legislature to reduce the state’s share of the excise tax surcharge from 10 percent to 3 percent, but that measure failed.

Honolulu Mayor Kirk Caldwell said Wednesday he also proposed a bill in his first year as mayor to reduce the amount the state takes from the excise surcharge, but “of course that legislation never made it out of committee, and I was told it’s dead on arrival if I try again,” Caldwell said. “So we’ll have to see what the lawsuit does.”

Hidden Charges at the Pump. The hosts for this show are Jay Fidell and...

The Good, the Bad, and the Ugly. The host for this show is Jay Fidell....

What happened and what was left over. The host for this episode is Jay Fidell....

Tom Yamachika of the Tax Foundation of Hawaii will discuss lawsuit that could cost Maui...