National data mask a great deal of state-by-state and regional variations in child well-being. A state-level examination of the data reveals a hard truth: A child’s chances of thriving depend not just on individual, familial and community characteristics, but also on the state in which she or he is born and raised.  States vary considerably in their amount of wealth and other resources. State policy choices also strongly influence children’s chances for success.

We derive a composite index of overall child well-being for each state by combining data across the four domains: (1) Economic Well-Being, (2) Education, (3) Health and (4) Family and Community. These composite scores are then translated into a single state ranking for child well-being.

Minnesota ranked first among states for overall child well-being, followed by New Hampshire and Massachusetts.  Minnesota’s number one ranking marks the first time in nearly a decade that a New England state did not hold the top spot for child well-being in our report.  The three lowest-ranked states were Louisiana, New Mexico and Mississippi.

The map [below] shows the distinct regional patterns that emerged from the state rankings. All of the northeastern states were in the top 10 in terms of overall child well-being, apart from Maine, Pennsylvania, New York and Rhode Island. Most of the states in the Midwest and Mountain regions ranked in the middle on overall child well-being, with the exception of Minnesota, Iowa, North Dakota, Utah and Nebraska, which were in the top 10.

States in the Southeast, Southwest and Appalachia — where the poorest states are located — populated the bottom of the overall rankings. In fact, with the exception of California, the 15 lowest-ranked states were located in these regions. States in the Southwest occupied three of the five lowest rankings for child well-being.

As will be explored in the sections that follow, the overall rankings obscure some important variations within states.  Although most states’ rankings did not vary dramatically across domains, there were a few exceptions. For example, Colorado ranked among the top 10 states in the Education domain, but placed 44th in the Health of its children. Wyoming ranked second for Economic Well-Being, but was among the worst 10 states for Health. For all states, the index identifies bright spots and room for improvement. 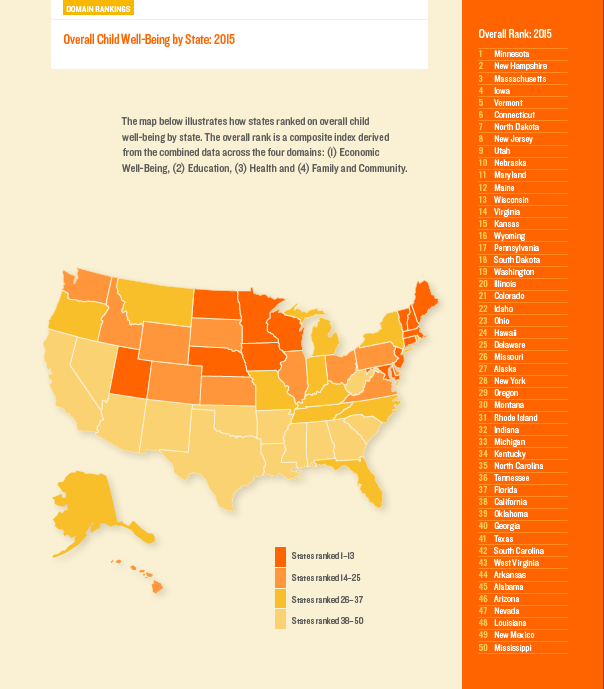 By Jared Walczak of the Tax Foundation Individual income taxes are the single largest source of state...