By Liz Malm, Morgan Scarboro of the Tax Foundation On average state and local governments collected a combined $1,007 person in the 2012 fiscal year—but some states vary significantly from this average. For example, four states have no sales tax: Delaware, Montana, New Hampshire, and Oregon. Alaska does not have a state sales tax, but does have local sales taxes.

You can find the data used to create this map here. 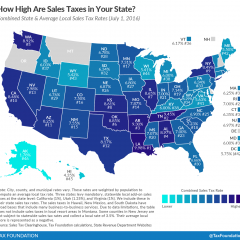