On January 15, the Institute on Taxation and Economic Policy (ITEP) released a report ranking the States in terms of how progressive their tax systems are.  Here is the executive summary of that report:

The 2015 Who Pays: A Distributional Analysis of the Tax Systems in All Fifty States (the fifth edition of the report) assesses the fairness of state and local tax systems by measuring the state and local taxes that will be paid in 2015 by different income groups as a share of their incomes. The report examines every state and the District of Columbia. It discusses important features of each state’s tax system and includes detailed state-by-state profiles that provide essential baseline data to help lawmakers understand the effect tax reform proposals will have on constituents at all income levels.

The report includes these main findings:

The Tax Foundation published a rebuttal to this report, taking issue with several of its key findings.

By Kyle Pomerleau, Richard Borean of the Tax Foundation For this week’s tax map, we’re... 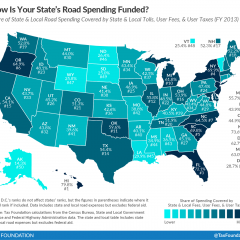 By the Staff of the Tax Foundation Taxing marijuana presents new and unique challenges. That’s...