Hawaii’s constitution mandates that the regular legislative session starts at 10:00 a.m. on the third Wednesday of January.

Bills bundled together by common interest groups and accepted and labeled as a package by the clerks.

The Governor’s annual address to the assembled joint legislature. The address presents an opportunity for the Governor to report on affairs of state, and to put forth recommendations and initiatives. Many visitors come to the Capitol to hear the Governor’s speech and witness the proceedings from the gallery (accessible on the ground floor/atrium level).

This is what is known as the “Governor’s Package.” The bills are prepared by executive branch agencies for consideration by the legislature, and are introduced on behalf of the executive branch by the President of the Senate and the Speaker of the House of Representatives.

The Chief Justice’s address to the assembled joint legislature. The address presents an opportunity to report on the judicial branch of government, and to put forth recommendations and initiatives.

A bill is “introduced” when it has been filed with the House or Senate Clerk, who gives it a number (with an HB or SB prefix) and then puts it on the calendar for First Reading by the chamber. After First Reading, it is given its committee referrals which specify which committees must hear and pass the measure for it to succeed. Only legislators may introduce bills. [Note: At introduction, each bill is given a “Bill Status” webpage that can be accessed via the Legislature’s website (www.capitol.hawaii.gov) and used to track all the measure’s activity.]

“Grant” refers to an award of appropriated state funds by the legislature to a specified recipient to support activities that benefit the community. Also known as “Grant-in-Aid.” “Subsidy” refers to a similar award to a recipient to reduce the costs incurred in providing a service to members of the public.

All bills referred to three or more committees must be in their second-to-last committee by this date. (Note: A referral to a joint committee counts as one committee referral.) This deadline allows ample time for successful bills to make their way to the last committee in their originating chamber by the First Lateral deadline.

All bills referred to more than one committee (i.e., those with multiple referrals) must move to their final committee in the originating chamber by this day.

Hawaii’s Constitution mandates a 5 day recess between the 20th and 40th days of the regular session. Neither the House of Representatives nor the Senate convene or assemble formally in chamber on recess days. Committee hearings do take place, however.

All bills under consideration for crossover to the other chamber must be submitted to the clerk of the originating chamber in their final form at least 48 hours prior to third reading. This “decking” ensures an opportunity for final review by the chamber’s members before being asked to vote on the third reading. Note: A bill must pass three readings in each chamber before being enrolled to the governor.

Resolutions are legislative measures which may request action of a government entity or state the legislature’s position on an issue. They don’t have the force and effect of law, require only one reading in chamber, and are not enrolled to the Governor.

Deadline for submitting the spending plan developed by the Governor which estimates expenditures for the fiscal year or biennium and the proposed means of financing these expenditures.

Last day for third reading of budget bills in order to move to the other chamber.

All bills referred to three or more committees must be in their second-to-last committee in the non-originating chamber by this date. (Note: A referral to a joint committee counts as one committee referral.) This deadline allows ample time for successful bills to make their way to their last committee by the Second Lateral deadline.

All bills with multiple referrals must move to their final referral committee in the non-originating chamber by this date.

Concurrent resolutions require adoption in each chamber and are used to state the official position of the Legislature on an issue, or to request action formally without having to mandate it by law. All concurrent resolutions with multiple referrals must move to their final committee in the originating chamber by this date.

Deadline for passing the single reading required for resolutions in order to move from the originating chamber to the other chamber.

Deadline for submitting bills that have been amended by the non-originating chamber to the clerk of that chamber. This allows for delivery of the amended bills in their final form to the chamber’s members at least 48 hours prior to third reading.

The deadline for the originating chamber to disagree with changes made to its bills by the other chamber. When the Senate and House disagree on a bill, members from each chamber can meet in a “conference” committee to reconcile their differences.

A proposed amendment’s final form must be provided by written notice to the Governor at least 10 days prior to passing final reading by a 2/3 vote in each chamber. Once adopted by the Legislature, the proposed amendment is submitted to the voters, in the form of a ‘yes or no’ question on the ballot, for ultimate decision.

Deadline for submitting non-fiscal bills for final reading by both chambers.

MAY 1 — FINAL DECKING OF FISCAL BILLS

Deadline for submitting fiscal bills for final reading by both chambers. Fiscal bills include appropriation or spending bills, tax credits, etc. that emerge from the fiscal committee of their respective originating chamber (Finance in the House, Ways and Means in the Senate).

In Latin, “sine die” means “without a day.” Adjournment sine die occurs on the 60th legislative day of a regular session, and indicates a suspension of the business of the legislature indefinitely. From this point, the Legislature will certify bills whose form both chambers have agreed to, and will transmit or “enroll” those bills to the Governor. 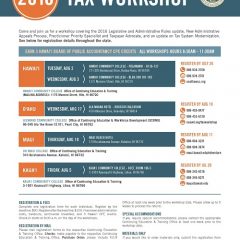 Aloha! This year’s annual member luncheon will be held on Wednesday, September 9, 2015 at...