In this three-part series we are suggesting that we all look at growing our state’s economic position by concentrating on things we can control, like our tax rates. We examined the business tax climate rating the national Tax Foundation gave our state, and reviewed the good scores, for corporate income tax, sales tax, and property taxes, and one bad score for individual income tax.

The final area in the study, where Hawaii got slammed the hardest with a rank of #38, was unemployment tax. This is a tax that is paid by all employers and it goes into a fund that pays benefits to people who, through no fault of their own, find themselves unemployed.

Unemployment tax applies to an employee’s total wages up to a certain dollar limit, like Social Security tax. This dollar limit is called the taxable wage base (TWB). Under federal law and in most states, the TWB is around $7,000. In Hawaii it’s around $39,000, which is massive. It’s the second highest TWB in the country behind that of the state of Washington and earned us huge demerits in this study.

The study also considered minimum and maximum unemployment rates. We have a table of eight tax rate schedules, A being the best one and H being the worst. The particular rate schedule for a given year is determined at the end of the previous year by looking at the health of the overall fund. At the end of 2012 our unemployment fund looked pretty sickly, so 2013 was set at Schedule G with a minimum tax rate of 1.8%. And the maximum rate, which had been 5.4% for years, got jacked up to 6.6% by our legislators in 2012 effective in 2013.

In all, Hawaii fell eight rungs from last year, tying the great state of New Jersey for the honor of being the least improved state over the past year.

On the bright side, the overall fund was in better health at the end of last year so 2014 rates were set at Schedule E, an improvement of two notches. Hopefully, that will raise us a rung or two when the next business tax rankings are published.

In addition, we might want to take a good, hard look at the TWB. In 2007 the legislature saw fit to decrease the TWB to $13,000 on a temporary basis, as it had done on a number of occasions prior to 2007. Apparently, some people at the Capitol realized that the TWB was in the stratosphere and employers were hurting as a result. But in 2007, the temporary relief was accompanied by a permanent increase in unemployment benefits which in the long run has had the effect of increasing the overall tax burden on employers – pay me now or pay me later! If we really want to help employers, lawmakers might want to consider a different approach.

Between all of these issues, not only those raised this week but also in the previous two articles, there is certainly a lot for our lawmakers to think about as they approach the upcoming 2015 legislative session if they are interested in improving the business tax climate in Hawaii and in facilitating GDP growth. Finally, we should be mindful that although people will have a chance very soon to vote at the ballot box, they are constantly voting with their dollars and their feet.

Here in Hawaii, we are intensely dependent on goods that come into the State from... 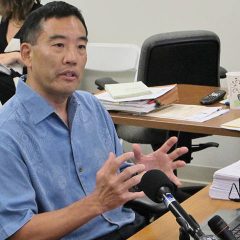 By Lowell L. Kalapa As lawmakers race toward adjournment under pressure to pass some sort...