These difficult economic times may, in fact, provide an opportunity for taxpayers to send elected officials a loud and clear message for change. However, it will also necessitate a change in taxpayers’ attitude about the potential for change to happen.

The glacier of state and county bureaucracy is so huge, many both within and outside of government shrug their shoulders when one suggests that changes need to be made. For example, those familiar with the maze of permitting requirements for housing developments throw their hands up and sigh that there can never be any changes to the system. Forget that it takes a minimum of five years to re-zone land into urban use and secure the necessary approvals before the first spade can be put into the ground.

Because of the lengthy process, millions of dollars will have been invested in a project even before the first house is built. This is because the cost of securing the necessary approvals involves such lengthy time commitments, the funds must be advanced or borrowed on which interest must be paid. In one case, it took a developer so long to get to the point of construction, the original landowner took the land back and now the developer has nothing to show for all the time and money invested in the project.

While elected officials continue to whine and wring their hands over the homeless and the lack of affordable housing, they should look for the culprit in the nearest mirror. Why isn’t there more affordable housing? The term “affordable” is an oxymoron when it comes to the hurdles put in place by government. What few “affordable” units there are is either because of a government mandate or where the cost of construction is subsidized as in the case of volunteers for Habitat for Humanity projects or the sweat equity of families in self-help housing projects.

Even permits for modifications of a building can take an eon to secure because no one wants to make a decision because the decision just might be wrong and no one wants to take the blame for making a wrong decision. Either that or an application will be rejected and no reason is given leaving the applicant wondering which part of the application was incorrect. As a result, the permitting process is drawn out and hundreds, if not thousands, of dollars are expended and re-expended as a result of the delay.

Both developers and labor should be concerned because it is these delays that stand in the way of valuable jobs in the construction industry and add to the cost of bringing affordable housing to market. However, what it does mean is that government has to be a part of the solution rather than part of the problem as this community can no longer afford to do things as they have been done for the past 50 years.

While we have highlighted the building, zoning and permitting process here, the same can be said of many other functions of state and county government. Both lawmakers, as well as administrators, need to sit down and ask themselves, “Could this service be delivered more efficiently and faster?” They should also ask, “whether or not this is a service that could be done by someone outside of government.”

In these difficult economic times as government watches it resources wane, business as usual must be rejected in favor of finding new and better ways to serve the public, providing a system of services that will enhance economic activity rather than throw road blocks before progress. Leaders in both the private and public sector cannot resign themselves to an attitude that is willing to accept what has been rather than what could be.

As we sit on the horizon of a new year and more importantly on the horizon of a new legislative session, it is important that lawmakers and taxpayers, as well as the rank and file within government, accept the challenge to view government from a new perspective, from a viewpoint that asks, “Why not?” We should all put the notion that things will never change behind us and look forward to finding better and new ways that foster a growing, healthy environment for all walks of life.

In some ways it may also mean doing without some of the programs and services to which we have been accustomed to having government provide while taking on more personal responsibility and holding those who make the decisions that govern our community accountable for those decisions. In that respect, these hard economic times must force all of us to reinvent government and what we expect for our hard-earned tax dollars. 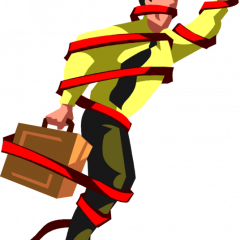 By Lowell L. Kalapa (Released on 3/7/10) It is truly amazing that despite months and...