Over the past few weeks we have covered a number of topics that have evoked readers to respond or otherwise comment. And indeed, that is just what these commentaries are designed to do; that is, to spawn discussion about issues that usually don’t make it to the top of our daily conversations.

However, because the issues of taxes and public finance are certainly not everyday subjects, familiar to but a few and widely misunderstood by many, some of the observations made in these commentaries have been misconstrued. Probably the issue that raised the most comments was the discussion of earmarking taxes — that were once receipts of the general fund — for specific projects or programs.

The discussion that stirred the most controversy was whether or not the cigarette tax should be earmarked for specific programs like the operations and capital improvements of the Hawaii Cancer Research Center or to help fund community health centers. However, many readers viewed the increase in the cigarette tax more as a means of discouraging the use of the product because it is an unhealthy habit rather than a source of income for these particular programs.

The problem is that these two goals are at odds with one another. If, in fact, the higher cigarette tax and, therefore, the higher cost of the product is successful in achieving a reduction in smoking, then that other goal is not achieved, and that is providing a dependable source of funds for the operations of the community health centers or the Hawaii Cancer Research Center. Consequently, lawmakers will have to find another way to support these programs and facilities or drop funding all together. The other alternative is to go back to the table to find other taxes to raise or take the money from another program. That’s the problem with earmarking, be it the cigarette tax, the conveyance tax, or driver license registration fees.

The other issue raised by another reader was that a statement made about the sales tax not applying to purchases by a business where the purchases are for the business’ consumption was misleading. And perhaps the statement was read too broadly, but the truth of the matter is that many other states recognize that some purchases by businesses are critical for the production of income and exempt purchases of goods and services from their state or local sales tax. The retail sales tax is generally not applied to services, with the exception of New Mexico which imposes its sales tax on a number of services. However, in New Mexico it is not applied as pervasively as Hawaii’s general excise tax. In particular, the application of the general excise tax to rent income, considered a service in most retail sales tax states, adds a tremendous cost to the overhead of a business and eventually must be recovered in the cost of the goods or services sold by the business in Hawaii.

So that leaves the exemption of goods from the retail sales tax. For example, Florida exempts the sale of fuels used by businesses in boilers. Here in Hawaii, the general excise tax is imposed on those fuels as well as those fuels purchased by the local electric utilities that burn those fuels to generate electricity and they are imposed at the full retail rate of 4(4.5)%. This additional cost is passed on to all of us as consumers of electricity and in the case of a business, that added cost is passed along to the customers of that business.

Then there is the state of Idaho where the spud is big business, as well as logging. The state exempts agricultural irrigation equipment vital to any farming activity and personal property used in the logging business. Similarly, the state of Illinois, where farming is a big part of the economic base, exempts fertilizer and other chemicals used in farming. On the other hand, here in Hawaii where the visitor industry is such a large component of the economic base, the general excise tax is imposed on mandatory gratuities or tips even though those tips accrue to the waiters and waitresses and do not benefit the restaurant owner or hotel even though those mandatory tips are required under a union contract. In Illinois, such mandatory tips are exempt from the state sales tax.

In Indiana, manufacturing equipment is exempt from the state sales tax in recognition that such equipment will produce products that will bring in income. True, the state of Hawaii recognizes the purchases of capital equipment as crucial to the creation of jobs and the production of income, but that tax relief takes the form of a tax credit which the taxpayer receives after the imposition of the general excise tax.

Although these are select transactions, they nonetheless recognize that the sales tax, or in Hawaii’s case the general excise tax, adds to the cost of doing business and the cost of the goods and services sold.

By Lowell L. Kalapa The other day when the House Finance Committee members heard measures...

By Tom Yamachika, President Every day we hear about “nonprofit organizations.”  But some of us... 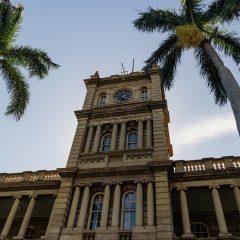