It gets pretty heady when you have a lot of money. In the case of elected officials, the urge to spend that money is almost overwhelming.

The problem elected officials have is remembering that it is NOT their money that they are spending but the taxpayers’ hard earned dollars. As a result, if the money is there, they will spend it, largely to ensure that they will get reelected. So elected officials do everything possible to spend those tax dollars to keep their constituents happy and content.

The problem with this type of spending just to pander to the voters is that often services are created or programs are launched that are truly not core services that are critical to the health and welfare of the community. Sometimes described as deferred maintenance or “unmet needs” the spending pie gets larger and larger as long as there is money.

This was the case in the late 1980’s and early 1990’s when the state was on a roll and the money was pouring into the state’s coffers. There was never a hesitation to fund this or that idea or program. This excessive spending was epitomized with the purchase of koa benches for the state capitol and the funding of an effort to return a rotting skeleton of a boat from the Philippines.

But then came the bad times as it was discovered that the state treasury had been literally emptied of its surplus dollars. Compounded with a sinking economic outlook, elected officials scrambled to keep afloat programs and projects that had been initiated in the good years. This is the period when lawmakers raided many of the state’s special funds, some which had been set aside purposely to hide the general fund surplus in earlier years and some which were legitimate special funds like the state highway fund which was raided for over $150 million.

Now that the state general fund is forecast with a growing state surplus, state officials at both the administrative and legislative levels could not resist the urge to spend those surplus dollars for deferred maintenance and “unmet needs.” In addition to the supplemental budget, lawmakers approved 80 specific appropriation bills which will appropriate an additional $86.1 million in state general funds – your tax dollars – for the current fiscal year and another $327.8 million of general funds for the coming fiscal year – 2007.

Specific appropriation bills usually are adopted because they need the enabling language to set up new programs or services or change how money is to be spent in an existing program or service. In other words, they represent spending over and above what has already been a part of the normal day-to-day operations of state government.

While lawmakers and administration officials argue that these are all worthy public programs or projects, the problem is that they are on top of existing services. And where new positions are created, those are on-going costs that will be difficult to eliminate in the future.

What can and will happen is the situation that Honolulu county council members found themselves in earlier this month. Although they did reduce some of the expenditures requested by the mayor, they could not cut enough of the budget to allow them to lower tax rates for both residential and nonresidential properties. Instead, they opted to lower the tax rate for their voting constituency, homeowners and renters, while raising the tax rate on nonresidential properties.

In the end, as it was pointed out to them, ultimately the higher property tax burden will be passed on to the customers of that business be it residents or visitors. So while homeowners won’t see their property tax bill go up as fast as the rise in their valuations, as consumers, those taxpayers will still end up paying a tax increase as the goods and services purchased from nonresidential businesses will rise in direct proportion to the increase in their real property tax bills. Thus, nonresidential property owners in Honolulu will be hit with a double whammy as both their valuations and their property tax rates increase.

If state lawmakers don’t start holding the line on spending, they may soon find themselves – again – in the unenviable position of having to raise taxes and fees to balance the budget. If they don’t believe it will happen again, all they have to do is to turn the pages of time back ten years to see their predecessors struggling with that very problem.

While they enjoyed spending the looming surplus this year, it may not always be so. To avoid the same difficult times in the future, lawmakers need to curb their urge to spend because they sure didn’t do it this year. 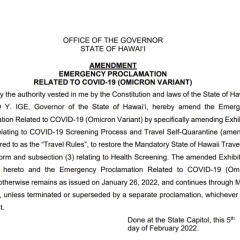 By Lowell L. Kalapa (Released on 4/8/12) Despite the campaign rhetoric lawmakers chant over and...