With interest rates at an all time low and with a limited supply of housing, it is not too surprising that the cost of housing has shot through the roof.  This is true not only in Hawaii, but in a number of other large cities like San Francisco and in the greater Los Angeles metropolitan area.

So it should not come as a surprise that some lawmakers think that a tax on buyers who are trying to make a fast buck in real estate will deter these people from speculating in the real estate market. In fact, someone on the Governor’s Economic Momentum Commission has already forwarded the idea for consideration.  To make this new tax palatable, the proposal would use the proceeds to build affordable housing.

Like many of the ideas that lawmakers have come up within the past, the idea of a tax on speculation does nothing more than skew the market. Proposals to slap a tax on speculators are introduced periodically whenever the local real estate market activity is high. This phenomenon usually lasts for only a brief period until market prices in the targeted areas meet the demand. The most recent call for such a “speculation” tax was the by-product of the sharp fall in the value of the U.S. dollar which enabled foreigners, largely Japanese investors, to purchase property in Hawaii and mostly in the residential category. This time the fingers are pointed at dot com executives and baby boomers that are beginning to retire.

Also influencing the willingness of these investors to pay seemingly exorbitant prices was the comparative price of property in their domestic real estate markets. However, the current run-up in housing prices has more to do with the historic low interest rates and the dwindling inventory of new housing. Some of the latter is due to the fact that a lot of construction resources have been diverted to the large contracts for renovation and construction of housing for the military.  And certainly the lack of inventory has a lot to do with the infamous delays cause by the state and county permitting process.

But adopting a tax on speculators is not the answer to increasing the housing inventory, nor is holding the cost of housing down.  If nothing else, a tax on speculative profits will merely exacerbate the situation. The burden of such a tax falls on the seller, regardless of resident status. Proponents somehow believe that slapping a tax on “speculators,” however they are defined, will discourage the sale to any buyer.

A tax enacted as a disincentive, especially one imposed on capital gains, entails serious equity and perception problems. Again, what the definition of a speculator would be would have serious impact on those who, out of necessity, may be caught in the web. For example, homebuyers who may be forced to sell due to financial need or a job transfer to another location might be caught.

Real estate is an illiquid and risky investment. Unlike a savings account, the funds invested in property cannot be shifted or recouped very quickly, in most cases, and the monies invested often do not pay a guaranteed interest rate. Property investors will buy or sell when conditions are most favorable. A tax on an investment decision would distort that decision making process and create inefficiencies in the marketplace.

For example, if an investor who had purchased a piece of property with the intent to hold it for ten years finds that the going price at the end of three years will provide him a good return on his money, he will sell. If there were a tax penalty, it may be large enough to deter the sale and at the ten year mark the investor may or may not find himself in a down market unable to make a profit. As a result, the tax lessens potential returns and skews the risk/reward ratio that all investors take into account and forces them to seek better returns in other investments or locations.

Such a tax would then send strong signals to investors that Hawaii is not a good place to invest capital if there is the potential that the speculator tax mentality would be extended to other types of investment whether it be real or personal property. Without the influx of new capital, the potential for economic growth in Hawaii would surely disappear. 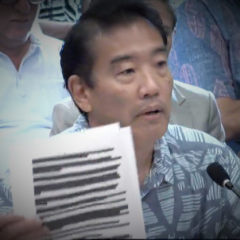