More than a decade ago, lawmakers adopted a tax credit for the purpose of encouraging the creation of new jobs. Studies had shown that capital equipment is essential to the creation of new employment opportunities.
Capital equipment includes things like a vehicle or a cash register or a computer or a desk, anything that a business purchases which is depreciable and is used in that business’ activity which creates income for the business. The tax credit was adopted in response to the claim that adding the 4% general excise tax merely increased the cost of the capital goods, making the cost of creating jobs 4% more expensive.
Although the original proposal would have merely exempted such sales from the general excise tax, such an exemption would have been difficult to administer and verify. So lawmakers turned to the credit as a means of refunding the cost of the 4% tax to the business. The concept of the tax credit was patterned after the federal investment tax credit, allowing the credit for tangible personal property that was depreciable. All of the tests were based on those used for the federal credit as references to the federal law were included in the legislation.
Two stipulations were added. One was that the sale or purchase of the equipment had to have been subject to the general excise or use tax at the rate of 4% which is only logical since the credit is supposed to be a “refund” of the tax at that amount. The second is that the credit must be claimed within twelve months after the tax was imposed and paid.
So the intent of the legislature was to lessen the cost of capital goods because they realized the importance of capital goods to the creation of jobs. If that is the case, then the legislation introduced last year by the local airlines takes on a different light.
The legislation proposed would have exempted the lease rent paid by the two local airlines from the 4% general excise tax because it had been determined that the lessor was doing business in the state because the property of the lessor – the jet planes – were being used in the state. The governor threatened to veto the measure because he believed it was bad tax policy singling out the airlines for a special “tax break.” It was argued that there were others who would still have to pay the tax on their lease rent.
At one point that made a lot of sense until one really thought about it. There are probably few other businesses which lease capital equipment from out-of-state lessors. And if businesses leased equipment from in- state lessors, the purchase of that equipment was probably a beneficiary of the capital goods excise tax credit. True, the lease rent paid by the business would be subject to the 4% general excise tax, but the cost of the equipment and therefore the lease rent would have been less as a result of the lessor being able to claim the credit.
While it might be argued that there is no certainty that the lessor would automatically pass on the cost savings of the tax credit to the business, the reduction of the cost of the capital equipment by the amount of the credit would certainly be considered in negotiating the lease rent of the equipment. The other unique element about the proposed legislation is that there are probably few other types of equipment that would be leased from an out-of-state lessor. Given the fact that there aren’t very many owners of large passenger jet planes in Hawaii, the two local airlines probably have no choice but to lease from an out-of-state lessor.
Some might question why the two local airlines lease rather than purchase their equipment. Well, when one considers how many millions of dollars each plane probably costs, it begins to make sense that the airlines lease rather tie up those millions of dollars in an airplane that they would have to fly almost forever in order to recover the cost of purchasing the plane.
In a state where people have no choice but to fly if they are to get from one end of the state to the other, the real losers in the failure of last session’s legislation are the people of the state. Ultimately the cost of the tax on those leases is just passed on to the passengers and businesses shipping goods between the islands. The cost of a plane ticket and those fruits and vegetables from the neighbor islands just got much more expensive. And philosophically, the cost of the tax on the lease rent flies in the face of the legislative intent to create jobs with the capital goods tax credit.

By Lowell L. Kalapa After last week’s column about the origins of the public service... 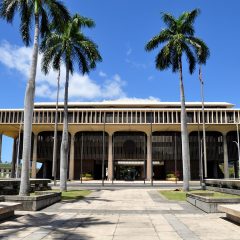 By Lowell L. Kalapa With the onslaught of the new year, taxpayers may not be...