Although elected officials like to lay the blame for the state’s fiscal crisis at the door of the economy, they seem to overlook the fact that many of the services that have evolved over the past decade came about only because the state was flush with cash at the end of the last decade.

However, as one observer noted last week, once a service or program is provided and funded, it is difficult to take it away. Indeed, part of the dilemma faced by elected officials across the state is the inability to tell constituents that there just isn’t enough money to go around to fund all the programs that were created in the hey day of state government.

After all, a major goal of an elected official’s life is to insure that he or she is reelected at the next go- around at the ballot box. So instead of making the difficult choices of closing down programs and shifting badly needed funds to critical programs, elected officials keep on spreading the money around so every program can stay in business even if the shortage of funding means that the program is poorly run and administered.

This highlights the other challenge that elected officials have not been able to fathom – setting priorities for government services. Instead of deciding that education and the libraries are of the greatest importance to the community and providing full funding for these programs, elected officials merely reduced the funding for all programs so no one constituency would be offended. The result is that every program suffers. However, what is interesting is that those high visibility programs, such as libraries and classrooms, get the media attention and therefore the attention of the public. Nothing is ever said about programs and positions that are not of a life and death importance that continue to get state funding.

Why should taxpayers be concerned that lawmakers can’t set priorities, that they continue to fund the plethora of programs even though there doesn’t seem to be enough money to fully fund them? Well, sooner or later, the time will come when enough public concern will give rise to the demand that public policy makers find new revenue resources to restore funding for the more critical programs such as education, welfare and the libraries while continuing to fund programs of questionable value. Since elected officials don’t like cutting state spending, and even more so, they don’t like raising taxes in an election year, enough pressure has to be brought to create public support for more revenues and therefore higher taxes, fees, and user charges.

There is already a whispering campaign between administration officials and some lawmakers that the state cannot afford the tax reductions enacted during the past two years and perhaps some of those tax cuts need to be repealed or suspended for the time being. Even some public employee unions have gotten their bandwagons going denouncing the possible reductions in government services as having low-term consequences that future generations will regret.

So, while some in government are pointing to economic recovery in the wings, it appears that the one most critical action that needs to be undertaken is not going to happen. With the resistance of elected officials bolstered by calls by the public employee unions against downsizing government, it does not appear that lawmakers will be able to make the necessary reductions in state spending to balance the state books.

Given that situation, the potential for reducing the cost of government and therefore the cost of living and doing business in Hawaii is not going to happen in the near future. If government continues to impose it draconian regulations and heavy burden of taxes on businesses and individuals, Hawaii will never catch the eye of the investor. Without the investment of new capital in Hawaii, new jobs will not be created, new construction will not be necessary, and new industries will never materialize.

Until elected officials realize that a good part of the economic problem we face is due to the high cost of government and the taxes and regulations it imposes on taxpayers, Hawaii’s economy will never rebound. This erratic path of government decisions in the past few years which on one hand wants to preserve the status quo in government while on the other wants to encourage economic development only contributes to the uncertainty about the business climate in Hawaii.

Elected officials have to make the decision once and for all to reduce the burden of government if they truly want to revitalize and re-energize the economy in Hawaii.

By Lowell L. Kalapa As the real estate market continues to heat up, real property...

By Lowell L. Kalapa It appears that it is business as usual down at the... 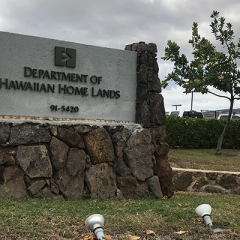 By Lowell L. Kalapa (Released on 10/28/07) Under legislation approved by the regular session of...