Well, folks, guess what? They have been passing around those rose colored glasses again and this time the shade was a bit too dark.

Earlier this year when the Council on Revenues dropped their forecast of state tax revenues, the difference in tax revenues anticipated for the current and next two fiscal years fell nearly $300 million short of what had been projected nearly three months earlier. The instant outcry from the administration and the labor people was rejection. The administration set about to deny that the Council was correct in its analysis and set about producing its own hypothesis based on yet to be approved legislation.

The administration claims that its billion-dollar capital improvement plan will “jump start” the economy, pouring millions of dollars into the construction industry which in turn will produce new jobs for construction workers and more income into the economy. This, in turn, will produce a plethora of tax revenues which will balance the state budget.

What seems to be missing in that thought process is that it will take time for that money to be first borrowed, time for the plans and the contracts to be drafted, and time for the projects to make their way through the state labyrinth of bureaucratic red tape. All of that means it will be months, if not years, before that “billion dollar” effort hits the streets.

But the problem is NOW. State tax collections accruing to the general fund are down by nearly 2.1% for the first eleven months of this year and with less than a month to go, it hardly seems possible that the actual collections will be able to meet the 1.2% growth rate predicted by the Council on Revenues back in March. That would be a swing of more than $90 million just for the month of June.

It is interesting to note that when the Council on Revenues met in their workshop session approximately a week before their formal public session, it appeared that the majority of the members wanted to lower the 1.2% number to something below the one percent level. However, seven days later, on a 4 to 3 vote, the Council elected to stay with its previous forecast. Looking back, perhaps the Council should have listened to itself and lowered its forecast.

It is also critical to remember that the Council was criticized for not taking into account the administration’s proposal when it lowered its forecast in the middle of session. But now, in retrospect, it appears that the Council was only doing its job in reading the tea leaves and reporting that the outlook is pretty bleak.

Then, like now, the administration seems to be in a state of denial. Back then it was a denial that the Council’s estimates were on the ball. Now, it is a matter of denying that it has any responsibility for making the restrictions or any of the reductions in spending of a budget that has already been approved by the legislature.

Instead, the administration wants the legislature to come back into special session to approve some of the revenue “enhancement” measures, such as the repeal of the insurance tax credit that has caused millions of dollars to be placed in escrow, and capping the counties’ share of the transient accommodations tax (TAT). And who knows what other revenue “enhancements?” Could the administration ask for an increase in taxes?

That possibility alone is scary, but what is more important is the subliminal message. If readers haven’t figured it out yet, this is it: they don’t want to cut spending!They want business as usual.

When are elected officials going to realize that they have sent the economy into the toilet and now they want to flush it down the sewer? Inflammatory? Perhaps, but the point is that what elected officials have been doing up until this point is avoiding the real problem, that government is eating all of us out of our jobs, our homes, and our families.

It is time for our government officials to start cutting rather than looking for more revenues that will only delay dealing with reality. 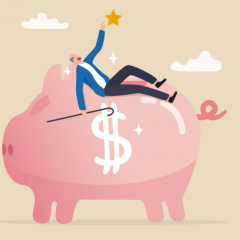